Kitchen Restoring and Updating in the Grand 1920s Tudor Style

Originally this kitchen felt claustrophobic. It had a separate pantry, a breakfast nook, and a kitchen area with all the amenities crammed into a 10-by-10- foot space.

Rick Jacobson did everything possible to make the existing footprint of the kitchen seem bigger and improve traffic flow, while respecting the original Tudor design and materials. The remodeling design moved plumbing, removed part of a wall to create a pass-through to the main hallway, added an island, and enlarged an archway.

The remodeler tapped into his creativity to replicate the detail of arches and millwork that would have been used in the late 1920s.

The new kitchen created a warm inviting environment for entertaining guests and family while respecting the home’s contemporary architecture. There’s even a faucet dedicated to preparing pasta located where it makes the most sense: At the stove.

This project was featured in MplsStPaul Magazine in October, 2011. Read article 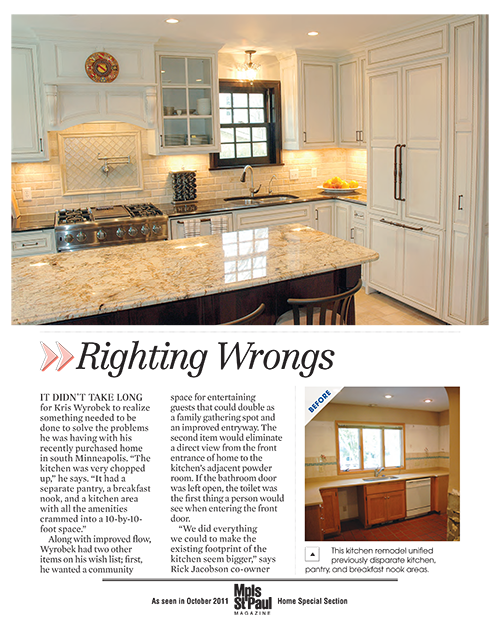